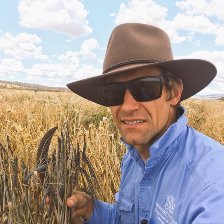 Barley, the cereal has several common uses, the most popular being malt production for the brewing industry and cattle feed for the beef industry. Barley is the second largest crop in Australia and fourth largest around the world. The wide scale adoption of zero tillage farming practices has seen an increase in many stubble borne diseases in the recent past, including net form of net blotch. This disease is estimated to cause economic losses of $19,000,000 in Australia annually. Many of the barley cultivars grown in Australia do not possess an adequate level of disease resistance to all pathotypes of this pathogen. To breed cultivars with durable resistance, an understanding of the virulences in the pathogen population and the resistances host gene pool is essential.

Ryan Fowler and Dr Lee Hickey in the trial field: 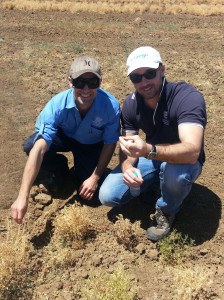 Characterise the Ptt population through a diversity study:

The diversity study clustered Ptt isolates into 4 broad groups which contained pathotypic variation within and between groups. The manuscript of this study is in the final stages of drafting.

Association mapping of the breeding population identified several QTL on chromosomes 3H, 4H, 5H and 6H. The QTL on 4H were effective only at the seeding stage. QTL located on 6H were effective at both growth stages. The first draft of the manuscript for this study is nearing completion.

Preliminary data indicates some of the lines in the RIL population are resistant to both pathotypes and some susceptible to both pathotypes. This suggests that the resistances are independent. The population is currently undergoing seed increase of the F6 generation for second year testing in 2015.

The leaf tissue, photographs and notes for each time point of the transcriptional experiment has been collected. RNA will be extracted and sent to AGRF for sequencing.