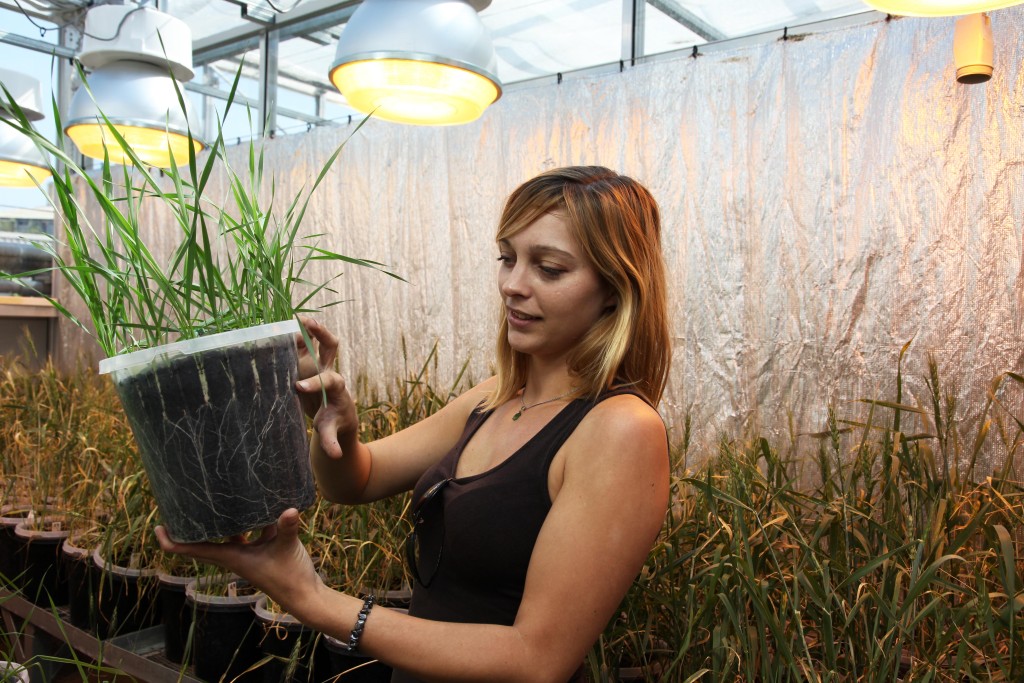 PhD candidate Cecile Richard’s technique is cheap, simple and allows scientists to better adapt grain crops, such as wheat, to drought conditions. The method uses a system of clear-plastic pots, which allows scientists to see through the pot wall and view the roots of the plant.

Ms Richard from UQ’s Queensland Alliance for Agriculture and Food Innovation (QAAFI) said according to the climate-change predictions, drought episodes were likely to be more frequent and more severe in some areas.

“Crop improvement for drought tolerance is a priority for feeding the growing human population,” she said.

“Roots allow plants to access water stored in the soil and are crucial for reliable crop production.

“Even when rain is scarce, water is often still available deep in the soil.

“By increasing the length and number of roots, we can boost access to water and safeguard the crop.”

“The roots are growing around the wall of the clear pot and it’s possible to measure different characteristics such as the angle and number of roots, based on images captured at ten days after sowing,” she said.

“These characteristics reflect the root growth pattern displayed by wheat in the field, which is important for the plant to access water.”

Previous techniques used for measuring roots had been time consuming and expensive.

“Planting wheat seeds around the rim of a clear-plastic pot to measure root characteristics has never been tried before,” Ms Richard said.

“This method is easy, cheap and rapid.”

Ms Richard’s technique was recently published in the open-access journal Plant Methods and could be one of the tools to help boost global wheat production.Her technique could speed-up selective breeding for drought-tolerant wheat strains.

“We hope to use the clear-pot technique to rapidly discover the genes responsible for these important root characteristics,” Ms Richard  said.

The research was partially funded by the Grains Research and Development Corporation of Australia, including a PhD scholarship for Ms Richard.