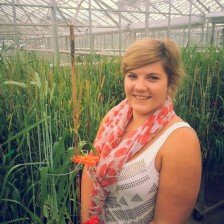 Leaf rust has been recognised as a significant constraint to barley production in Australia for many years. Recently the first simply inherited gene conferring adult plant resistance to leaf rust was characterised and named; Rph20. This gene contributes resistance to multiple pathotypes and has remained effective against leaf rust for more than 60 years. However, since development of the DNA marker linked to Rph20 and its rapid adoption amongst barley breeders, it is clear that the resistance gene does not confer high levels of resistance when deployed alone. Superior levels of resistance that are stable across environments require the presence of additional ‘minor genes’ or ‘modifiers’.

My project aims to broaden the understanding of the genetic control of adult plant resistance to leaf rust in barley. I will employ a three-pronged approach utilising cutting-edge techniques for dissecting the genetic control of complex traits including; association mapping, selective genotyping and nested association mapping (NAM). I aim to develop molecular markers linked to ‘minor’ genes affecting the expression of Rph20 which will lead to improved efficiency of breeding programs targeting development of resistant cultivars. 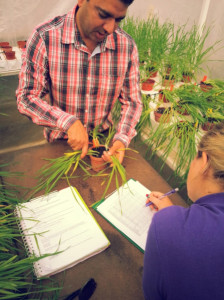 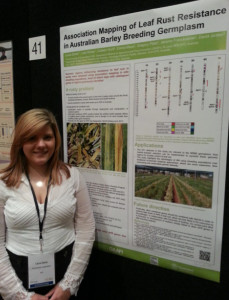 In the 2011 Hickey et al. study, a potential barley leaf rust adult plant resistance (APR) gene; qRphND, was detected. This QTL was considered promising as when coupled with the known APR gene Rph20, provided stable resistance across environments. The donor of the gene has been crossed to a susceptible standard and an F2:3 population developed to observe segregation patterns in a susceptible background. Selective genotyping was performed at the F2 stage, this involves genotyping individuals that display the most extreme phenotypes, i.e. strongly resistant vs strongly susceptible to detect DNA markers linked to a trait of interest. The selective genotyping paired with segregation patterns should provide information necessary to characterise and designate the gene.

Development of the NAM population is in its final stages. Three barley cultivars preferred for malting and widely grown throughout each of the three mega growing regions of Australia were selected as ‘reference varieties’ and lines that displayed superior phenotypes for APR from the NRBBP were selected as ‘donors’. The F4 plants were genotyped using DArT-seq markers and F4:5 lines sown in five leaf rust nurseries in 2016 (Toowoomba, Gatton, Cobbitty, Horsham and Uruguay). This population will provide a diverse range of leaf rust resistance as no selection pressure was applied throughout line development and will therefore be ideal for examining the gene interactions and genetic background effects for minor APR genes.

Using these three different, but complementary, mapping approaches will provide a thorough dissection of ‘minor’ genes interacting with Rph20.