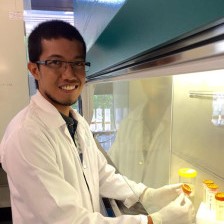 Yellow spot disease, caused by necrotrophic Pyrenophora tritici-repentis, has emerged as one of the most serious diseases of wheat crops worldwide. In Australia, it can cause losses equating to $212 M per year or $17.82/ha, causing a very serious threat to the wheat industry. Yellow spot is a stubble-borne leaf disease, thus wheat-on-wheat crop rotations and zero or minimal tillage farming practices are contributing to the build-up of inoculum in farmer’s fields. Fungicide control options lack efficiency, thus managing crop rotations and growing genetically resistant varieties is the most sustainable measure for controlling the disease. However, many Australian wheat varieties lack adequate resistance to yellow spot. Researchers have characterized three necrotrophic effectors (e.g. PtrToxA, PtrToxB, and PtrToxC), where each toxin interacts with a host sensitivity locus (i.e. Tsn1, Tsc2, and Tsc1, respectively), in an inverted gene-for-gene manner. Although the absence of these toxins is correlated with host resistance, there are many other unknown resistance factors that are responsible for phenotypic variation and add to the complexity of host resistance in the field. Thus, a better understanding of the genetic mechanisms controlling quantitative resistance along with characterisation of novel sources of resistance are necessary to protect our crops against constantly evolving pathogens such as yellow spot. 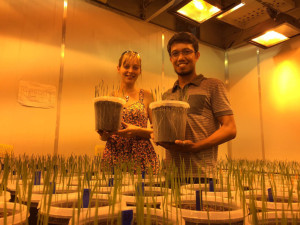 In general, the project aims to:

To initiate my PhD project, a rapid phenotyping technique under controlled environmental conditions (CEC), recently developed at UQ, was adapted to investigate yellow spot (YS) resistance in wheat. The method involves modifying photoperiod and temperature to accelerate plant development, referred to as ‘accelerated growth conditions’ (AGC). This enables efficient study of quantitative resistance expressed at adult growth stages. To investigate the effectiveness of this technique, a panel of wheat genotypes was examined for YS resistance in four separate experiments: 1) seedling assessment under regular glasshouse conditions; 2) adult-plant (AP) assessment under AGC; 3) integrated seedling and AP assessment.; 4) and AP in the field. Results indicated that YS disease responses obtained in all AP experiments correlated well, whereas correlations between AP and the seedling experiment were weaker. Adult-plant resistance (APR), which is manifested by susceptibility at seedling growth stage, but exhibiting resistance at adult-plant growth stage, was observed for some genotypes (e.g. CYMMIT line ‘ZWW10-50’ and Indian cultivar ‘Dharwar Dry’). The integrated seedling and AP assessment can be completed within just 7 weeks – providing a rapid and useful tool to efficiently phenotype APR to YS.

A panel of 300 accessions from the Vavilov collection was evaluated for resistance to YS and association mapping was performed. A number of QTL were identified associated with seedling and/or adult-plant resistance. Some QTL collocate with known genes and previously reported QTL. In this study, an APR QTL was identified on chromosome 6B effective against Ptr Race 1.

A number of accessions were identified to display high levels of APR. From these, a subset of lines (20 genotypes) was selected to create bi-parental mapping RIL populations for genetic studies. RIL populations were grown under ‘speed-breeding’ technique to generate filial generations. Presence/absence of Tsn1 was confirmed on these lines. Phenotyping (i.e. AGC and field experiment) and genotyping are currently underway.

Studies on transcriptional profiling in wheat associated with quantitative resistance to yellow spot are planned for the coming months. Training on the use of LCM technique has been undertaken. The technique allows specific isolation of infected cells for RNAseq analysis, in contrast to whole genome profiling.