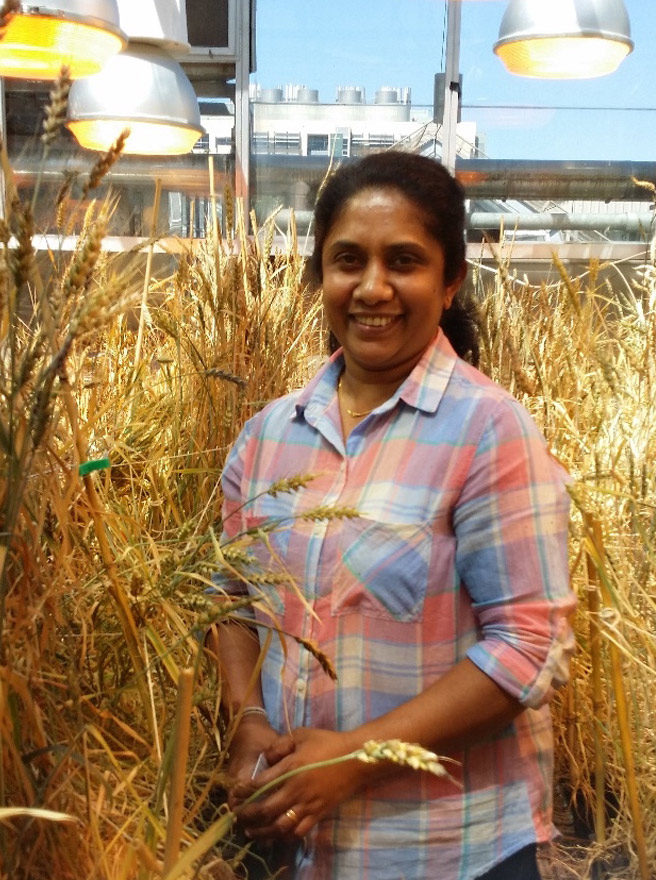 Stripe rust (YR), caused by Puccinia striiformis f. sp. tritici (Pst), is a devastating disease of wheat crops in Australia and around the world. The current annual average loss in Australia is $127 million and it’s predicted that YR will continue to be a dominant disease with the emergence of new races better adapted to warmer temperatures. It is important to develop varieties incorporating genetic resistance to maintain stable production and minimise the reliance on fungicides for disease control. This will in turn improve the profitability of production for farmers.

Unfortunately, most seedling resistance genes for YR previously deployed in wheat cultivars have been overcome by the pathogen. A longer lasting resistance and more durable form of resistance, known as adult plant resistance (APR) is being adopted by plant breeders, where ideally multiple genes are ideally pyramided or combined in new varieties of wheat. However, only a handful of well characterized APR genes with useful molecular markers are currently available to breeders (e.g. Yr18, Yr29). Thus, additional genes, along with useful DNA markers are sought.

·      Investigate possible interactions between delayed leaf senescence and APR to YR in wheat.

Genome wide association mapping (GWAS) was performed to identify novel source of APR for YR in wheat diversity panel comprised of 295 accessions originally sourced from Vavilov Institute of Plant Genetic Resources, Saint Petersburg, Russia.  These accessions were screened for resistance in both seedling and adult plant growth stages in 2014 and 2015 against the pathotype 134E16 A+Yr17+ Yr27. GWAS was conducted using GenStat v.17 with the genotyped data (13,933 markers) from Diversity Array Technology genotyping by sequencing (DArTseq GBS) microarray platform. A total of 37 QTL were detected for stripe rust resistance and 34 QTL were collocated with previous reported genes and QTL regions on chromosome 1B, 1D, 2A, 2B, 2D, 3A, 3B, 4A, 4D, 5A, 5B, 6A, 6B, 7A and 7B. Three of these 37 QTL on 3A, 4A and 5A were considered novel. Fourteen QTL were significantly associated with resistance at the adult plant stage. The QTL and responsible markers identified in this study will be useful to diversify the currant set of resistance genes available to wheat breeders.

I have initiated development of Recombinant Inbred Line (RIL) mapping populations to validate selected QTL. Three accessions from the wheat diversity panel that displayed stable APR to stripe rust were used as ‘resistant’ parents and crossed to the susceptible standard ‘Avocet’. F6 derived lines will be rapidly generated via single seed decent using speed breeding technology. In 2017, F6 lines will be genotyped with DArTseq GBS markers and gene mapping performed.

In 2016, a field experiment was established to investigate the interaction between APR to stripe rust and the stay-green trait. Twelve genotypes that carrying different levels of resistance to Pst and stay green trait levels were selected from the Nested Association Mapping (NAM) population developed by members of the Hickey Lab. Plots will be scanned using an Optical Handheld Green-seeker to quantify NDVI under stripe rust infection. In addition, remote sensing data will be compared to visual scoring measures and ground-based NDVI measures to validate the high-throughput image-based phenotyping system.

Wheat genotypes carrying combinations of known resistance genes will be evaluated for Pst resistance at different growth stages in the field. These experiments will enhance our knowledge of the effectiveness of the APR genes when infection occurs at specific growth stages.