Searching for answers in the weeds of wheat fields in Morocco

Being a scientist, travel is certainly one of the perks of the job and our recent visit to Morocco was truly an eye-opening experience and one we rank highly among the many countries we have visited. Morocco is beautiful, home to friendly people, amazing food and perhaps most important, exquisite coffee.

While we certainly enjoyed these finer things in life, the main purpose of our visit centred on establishing new collaborations with both the wheat and barley breeding programs of ICARDA.

We were fortunate to have a fabulous host – Dr. Filippo Bassi (Durum breeder at ICARDA), who provided an authentic Moroccan experience. We travelled around the countryside, visiting the many field trials of ICARDA. One of the days, we travelled to the research station of Annoceur on the Atlas mountains, which is some 1,600m above sea level. ICARDA uses this location to test for cold resistance of wheat and barley, with temperatures during winter that reach -10 C and snow coverage that extends for two months (yes, Morocco can be cold too!). In summer, the cooler temperatures and availability of good irrigation water at this station allows for ideal off-season planting conditions. The early generations (F2 and F4) are typically grown at the high-plateau (420 m) station of Marchouch under rain-fed conditions (200 – 350 mm), harvested in early June and re-planted in Annoceur by early July.

The field site at Annoceur is a beautiful setting. For a wheat or barley breeder, it feels like you are in the middle of a fairy-tale. The cereal field trials are surrounded by trees and mountains – oh the serenity! The station also houses various fruit and herb breeding programs. Needless to say, in between looking at wheat and barley plots, the cherries in season were hard to resist.

In addition to this scenic backdrop, there were many small weeds with beautiful flowers – some blue, some red. The weeds in Australia certainly don’t appear as delightful. Dr Bassi pointed out that one of the weeds, which had small blue flowers was called Anchusa (A. Italica) – the alternate host of one of the wheat leaf rust pathogens, Puccinia tritici-duri, in Morocco. The amazing thing was that the Anchusa was even growing amongst the wheat and barley plots!

We don’t have any of the alternate hosts required for sexual recombination for wheat rust diseases in Australia. However, we do have the Star of Bethlehem, the alternate host of barley leaf rust (Puccinia hordei), growing throughout South Australia.

Despite decades of intense research in cereal-rust pathosystems, there are still many questions to answer. Understanding the relationship and evolution between hosts and pathogens may provide the path to discovering new ways to manage crop diseases. The sexual stage of the wheat leaf rust pathogens has been generally regarded as an unimportant part of the epidemiological cycle of the disease. This is mostly due to the fact that research has shown that the P. triticinapopulations hold many characteristics of clonal populations. Moreover, high virulence diversity is observed in regions where Thalictrum spp., alternate host of Puccinia triticina, is absent or where no susceptible alternate host has been identified.  However, in the Mediterranean region a second wheat leaf rust pathogen Puccinia tritici-duri (P. recondita complex Group II) is known to occur. The P. tritici-durialternate host Anchusa italica, belongs to the Boraginaceae family and is distributed throughout the Mediterranean region and Asia. Ezzahiri et al., (1992) reported that in Morocco heavily infected durum wheat was observed in fields where A. italica was present.  Similarly, there are reports of P. tritici-duri samples collected in southern Portugal with virulence on durum and hexaploid wheat (Anisker, 1997).

Despite these reports, little is known about the role of P. tritici-duri in this region and as part of the worldwide leaf rust disease complex. Thus, the extent of functionality of an alternate host in the Mediterranean and North African region represents an important question to answer for future disease management. Sexual recombination of the pathogen on the alternate host may lead to higher diversity and faster virulence evolution in the pathogen population. Moreover, durum wheat is extremely important in Morocco (nearly 1M ha), in North Africa (3M ha), and in the whole Mediterranean basin (approx. 6 M ha). It is a major component of the people’s caloric intake in this region, with nearly 8 meals per week derived from semolina products. Therefore, it is of significant interest to dissect the leaf rust pathogens regional epidemiological cycle and evolution.Current efforts by Maricelis Acevedo at North Dakota State University in collaboration with James Kolmer at the USDA aim to characterize the leaf rust pathogen population from leaf rust samples collected from bread (common) wheat and durum wheat from the region.

Acevedo plans to revisit the field locations in Morocco during the winter and early spring months when aecia on Anchusa should be evident in the lower altitudes.

Lee Hickey is a Research Fellow at the Queensland Alliance for Agriculture and Food Innovation (QAAFI) at the University of Queensland.  Follow him on Twitter @DrHikov.

Maricelis Acevedo is an Assistant Professor at North Dakota State University.  She received the Jeanie Borlaug Laube Women in Triticum Early Career award in 2010. Follow her on Twitter @MaricelisAceve1 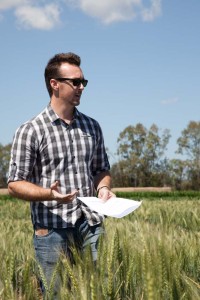 QAAFI Research Fellow Lee Hickey has been honoured with an invitation to take part in a Bill & Melinda Gates Foundation international workshop for early career scientists.

The three-day wheat leadership workshop in Heidelberg, Germany (16-19 Dec) is designed to help researchers  deal productively with challenges related to interpersonal aspects of their work.

Dr Hickey is one of only two Australian wheat scientists invited to participate.

He will be joining 17 other early career scientists from countries such as USA, Israel, Uruguay and Kenya.

University of Queensland scientists have discovered a fast way to develop a new strain of wheat that is resistant to stripe rust and pre-harvest sprouting. The research team developed the wheat product using a new breeding strategy that slashes development time from more than 10 years to just two-and-a-half years.

Dr Lee Hickey, from UQ’s Queensland Alliance for Agriculture and Food Innovation, said the technology was set to benefit farmers in the next few years with field trials being grown in Victoria and New South Wales.

“Pending the performance of the wheat lines, we reckon that this new wheat variety with high-yield potential, resistance to stripe rust and pre-harvest sprouting tolerance could be available to southern growers in less than four years,” Dr Hickey said.

In collaboration with his PhD supervisor, Dr Mark Dieters, the research duo used a novel approach to transfer multiple genes for resistance to stripe rust and grain dormancy into the Australian wheat cultivar H45. The UQ geneticists are working with the Ballarat seed company GrainSearch.

“We developed 84 wheat lines, each 90 to 95 per cent genetically similar to the H45 variety, but with multiple genes for resistance to rust and pre-harvest sprouting,” Dr Hickey said.

“There are no wheat varieties available to Australian growers that offer adequate protection against pre-harvest sprouting, so this would be a first.

“These characters will be important for determining which line becomes the new wheat variety,” he said.

The UQ team has used the same techniques to rapidly produce disease-resistant strains of barley. Dr Hickey will be presenting the work at the Australian Barley Technical Symposium in Melbourne this week. The researchers are working with breeding companies and seed companies across Australia and overseas to speed-up grain improvement techniques.

Released in the 1990s, H45 was a successful wheat variety with fast maturity and high-yield potential adopted by growers in Victoria and NSW. It has since been abandoned by most growers because it is susceptible to the current strains of stripe rust present along the east coast of Australia. As with all wheat varieties in Australia, H45 also lacks adequate grain dormancy to protect against pre-harvest sprouting, i.e. when germination of grain in the spike occurs in response to rainfall at crop maturity, resulting in grain crops being downgraded, resulting in less money for growers.

Initially formed in 2002 by a small group of innovative grain growers, GrainSearch has grown to be the largest grower-owned seed company in Australia with more than 200 grower-based shareholders. Their primary objective is to seek out, through the latest research and development techniques, new varieties of seed that significantly improve the productivity of shareholders, farming businesses and agricultural enterprises.