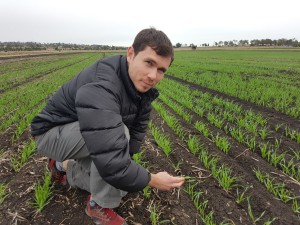 Barley is a major winter grain crop worldwide. It’s used as a food product, in malting, and as animal feed. Water limited environments, such as those found in Australia, can significantly reduce barley crop yields. Developing drought resistant cultivars has been a major focus in breeding programs around the world. Early vigour, which is defined as the rapid production of leaf area early in the season, is of potential benefit in water limited environments. To date, however, very little research has been conducted into the phenotypic variation of early vigour in barley, and its underlying genetic control. Early vigour has the potential to increase water-use efficiency, and also help prevent weed establishment. Determining the value of early vigour and its genetic basis will allow breeders to select for the trait in new drought-resistant cultivars using marker-assisted selection. Furthermore, identifying genes of interest in barley can inform selection for the trait in wheat as well, as this plant development attribute is likely conserved across cereal species.

The research project will investigate early vigour in barley over multiple field trials, across different environments and seasons. The principle field study involves 139 varieties of barley from around the world, which have been genotyped using high density DNA markers. We will assess each variety of barley using NDVI measurements, as well as destructive sampling to determine leaf area development and biomass accumulation. Overall, the data will allow us to characterise the genotypic and phenotypic diversity of barley, and to identify genomic regions of interest which contribute to the early vigour trait. Based on the results gathered from the field trials, we will further investigate the genetic basis of early vigour using glasshouse trials at the University of Queensland, St Lucia campus.