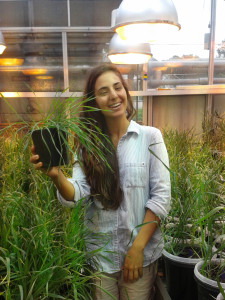 I am from Argentina and also have Australian citizenship so this has allowed me to study a Bachelor of Agricultural degree at the University of Queensland across both Gatton and St Lucia campuses. I am currently in my 4th year and doing my honours project with the Hickey team, where I am focused on exploring the diversity of root traits in cereal crops.

My project comprises of two separate research chapters: Chapter 1 is focused on characterising a panel of historic and modern Australian wheat cultivars, whereas Chapter 2 investigates a wheat landrace collection. To kick things off, with the help of wheat breeders, I have constructed a panel of 250 historically important Australian cultivars grown from 1880 to 2015. I intend to characterise these cultivars for seminal root angle and root number in order find out if more than a century of modern breeding has influenced root traits. It will also be interesting explore the different trends between root traits and cultivar characteristics, such as geographical region, breeding program and year of release.

As an extension of Chapter 1, I am planning to travel to Uruguay, where I will help scientists from INIA, the agricultural research institute, to characterize a panel of wheat cultivars bred and released over the past 100 years in Uruguay. The root trait data collected from this experiment will give insight into how root traits may have changed due to breeding for local adaptation and results will compliment my research in Australia.

In Chapter 2, I will explore the diversity for root traits within the collection of ~300 wheat landraces and aim to identify novel genes influencing seminal root angle and root number, which are not present in modern varieties. I am hoping to continue in agricultural research in Australia or in other research institutions around the world, once I have completed by Honours thesis.

Some key things I will be focused on this year: