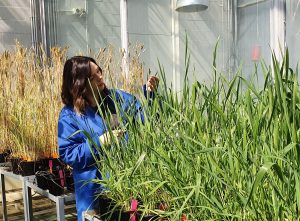 Rust diseases of wheat pose the largest biotic threat to global wheat production. The preferred method of rust disease control is through the deployment of wheat cultivars carrying genetic resistance because it is more effective, economical, and environmentally friendly than fungicide use. Researchers must identify novel genes that confer resistance to rust diseases in an effort to increase our repertoire of durable and effective genetic resistance for use in the field.

Using a combination of resistance gene identification techniques, I aim to identify a gene responsible for adult-plant resistance to leaf rust and a gene responsible for all-stage resistance to stripe rust. My research utilises recent advancements in wheat genomic research, including the annotated hexaploid and tetraploid wheat genome assemblies and the recently developed wheat Pan Genome, coupled with RNA sequencing and expression analysis, and more traditional mapping techniques for gene discovery. During my PhD project, I will also examine the additive effects of five different adult plant resistance genes to leaf rust, which often provide partial resistance that is insufficient on their own.